Erika Kleemann of Petoskey recently purchased the Alanson Dairy Queen, continuing a 70-year franchise in this area.  On April 15, 2020, Ms. Kleemann purchased the franchise from Jerry Kluck, and opened this Alanson store on May 1 to record crowds.

Ms. Kleemann comes from a Dairy Queen family. Her father, George Gunderson, started his Dairy Queen legacy when he was in his early 20’s, by purchasing the DQ franchise while continuing to serve in the US Navy. His parents supervised construction of the first Dairy Queen in Sault Ste Marie, ON in 1964, and after his Navy term was completed, George took over ownership and management of his first Dairy Queen store. His success led him to build and operate two more DQ restaurants, totaling three Dairy Queen stores in the Sault. He managed and operated the three DQ stores for 25 years, and had the highest volume of sales in North America in 1978. “My childhood years held memories of the busy restaurants with line-ups out the door,” stated Erika. “Since two of the three restaurants served hot food as well, I remember mom, working the kitchen flipping Brazier burgers and dad serving cones and blizzards. The best part of growing up in a DQ family, was the surplus of frozen soft serve we always had in the freezer at home.”

As a DQ lover at heart, and growing up on blizzards and strawberry milkshakes, Dairy Queen was always a pit stop for Erika, her two girls and her parents.  During the routine drive-thru stop one summer evening in August of 2019, her dad referenced his past ownership of the Dairy Queen franchise with the current owner at that time, Jerry Kluck.  Jerry was ready to retire after almost 20 years of ownership and asked George if he’d like to buy the restaurant. At 81 years of age, George brought the opportunity to his daughter, Erika and she started the “ball rolling.” The business proposal, offer, and corporate approval took most of the winter, and by April 15, 2020, the deal was set.

Erika took ownership on April 15, and opened on May 1, 2020. Mr. Kluck worked with her for six weeks, and also brought with him many loyal employees to help support the new owner.  “There have been lines down Highway 31 every day since the first day we opened,” states Erika. “Business has been thriving, and with the on-boarding help from Jerry and his returning staff, the Dairy Queen has been more successful than ever!”

The History of the Franchise: Dairy Queen has been around for 80 years. The first Dairy Queen started in 1940 in Joliet, IL with a 10 cent "all you can eat" sale. The promotion was so popular, worries that the stampede of customers would break the glass windows of the store front. Dilly bars were introduced in 1955, and the very popular Blizzard was introduced in 1985 and sold more than 175 Million in the very first year! Dairy Queen is known for their trademarked "curl" or "Q" on the top of the soft serve which means a thick, creamy soft serve. You can't get the DQ curl anywhere else. Jerry Kluck, the previous owner, kept this tradition alive by continuing to offer such trademarked amenities of the Dairy Queen experience. With the original Dairy Queen signage and all American patriotic color scheme, customers of all ages show up for a taste of Dairy Queen soft serve as their grass roots show through when they order form this store. Jerry's long legacy of almost 2 decades of ownership and management, hard work and success, has finally been passed on to another Dairy Queen generation.

“The community has been nothing but grateful that we're open and happy that we're serving them what they've been waiting in line to receive. I'm so thankful for the support we've received from each customer. This has truly been a dream come true,” states Erika.

The Dairy Queen will remain open until mid-October.  For more information, visit https://www.dairyqueen.com/us-en/Locator/Detail/8119

What inspired you to start your business?

Erika Kleemann is originally from Ontario and went to Humber College in Toronto. She has two daughters age 14 and 11. Since living in Petoskey for the last 15 years, she has worked in management at Lowe’s Home Improvement, and in Inside Sales at Petoskey Plastics. “I've always wanted to work for myself and own my own business,” she says. “My inner spark has always motivated me to do more in life. I'm so incredibly happy to be able to share my new business with my family, who have been working by my side since this venture began. It's an amazing feeling to be able to work next to my daughters and parents and share this experience with them.”

SCORE worked with Erika on her launch marketing and helped tell her family story to local media. 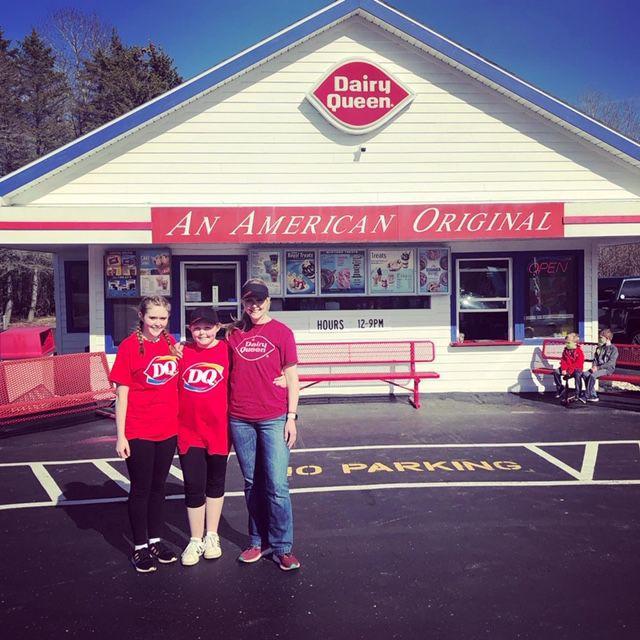